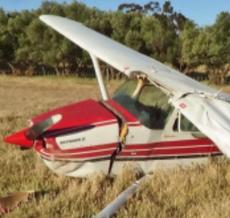 If disaster strikes, you might be forced to land the airplane in the middle of nowhere. What happens next? You try to call for help, but nothing shows up. It’s getting cold outside as night falls, how can we take advantage of the remaining pieces of my damaged aircraft beside me? Taking apart your Cessna 172 may sound insane, but it could save your life.

San Carlos Flight Center invites Michael Dutton a Private Pilot and survival expert on how to handle an emergency landing, and how to deal with the NTSB afterwards. However, what about the step in between? Let’s say you’ve made it through the crash safely, but now you have to survive long enough for rescuers to find you. A packed survival kit will vastly improve your chances, but there is another great resource available to all pilots: the aircraft itself. From the avionics on board to the structural components themselves, the plane you flew in on can be lifesaving.

This is open to all pilots who are wanting a more unique take on survival operations, and how to take advantage of everything you have. If you want to stay safe on all your future trips, you won’t want to miss this seminar.

Michael Dutton is a Private Pilot, rated in both helicopter and fixed wing aircraft, with over two hundred hours. He is also an Eagle Scout from Troop 132 and has spent years as a first aid and survival instructor. When he isn’t flying or working, he still goes camping with his friends from his old Troop.

San Carlos Flight Center (SCFC) is the SF Bay Area’s most dynamic flying club, committed to building general aviation thought safety, community, and adventure. AOPA has consistently recognized SCFC in their Best Flight School survey, most recently in 2018 as the best flight school in the West.

SCFC is committed to promoting safety in general aviation through our regular safety seminars and guest speaker programs. Space is often limited so it is important to sign up early. SCFC members may choose to watch the seminar live over the web at home, or recorded at a later date. Contact a SCFC member service rep at (650) 946-1700 for more information about online access